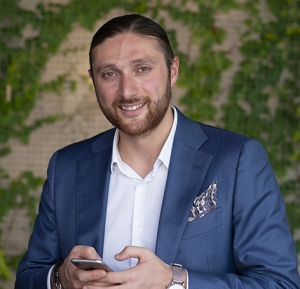 Alma, Georgia’s leading company in the outdoor advertising market, has won an auction announced by Tbilisi City Hall and gained the right to place outdoor advertisements in Tbilisi for the next fifteen years.

Alma has also become a partner of local advertising and creative agency Kraken.

“We believe that with Kraken we will be able to offer a number of innovations for the advertising industry”, Trapaidze said.

Q. Alma’s campaign on International Women’s Day, which displayed banners of exemplary Georgian women at bus stops, was very impressive. Tell us about this campaign.
A. The history of Georgia is full of interesting stories in which women play a central role, which we often don't hear about, or we don't pay enough attention to them.

The goal of the campaign was to raise awareness of lesser-known but important Georgian women and to inspire the public with their stories.

We revived the story of six Georgian women, who, despite many obstacles and stereotypes, achieved their goals and are now examples for others. We printed their stories on the banners and placed them at bus stops in Tbilisi.

The campaign continues with the stories of Ukrainian women. Together with our partner Kraken, we feathered stories about Ukrainian women who did not conform to stereotypes and showed the world their strength.

Q. On February 26, a message in support of Ukraine and an image of the Ukrainian flag were released on all Alma monitors across Georgia. How important do you think examples of such solidarity are? Why do you think there is misinformation that a Georgian hacker group is behind the initiative?
A. Due to the Russian-Ukrainian war, many Ukrainians visiting Georgia could not return to their homeland and so remain here. It was important for us that support from the Georgian people be as clear as possible.

The author of this message was every citizen of Georgia and therefore we decided not to talk about who initiated this gesture of solidarity. Unfortunately, various groups took advantage of this situation and spread misinformation.

Nevertheless, the main thing has not changed: Alma and its employees were able to show support and solidarity of the Ukrainian people most noticeably.

In addition, our portfolio includes about 40 screens, over 1,000 bus stops, 900 buses and the exclusive right to place advertisements in the Tbilisi and Batumi airports.

Q. Alma advertisements are mainly placed at Metro stations and bus stops. What are the advantages of placing advertisements in these places?
A. The Metro is one of the most powerful advertising channels. It's a part of the lives of half a million residents of Tbilisi – in the mornings and evenings, on Mondays and Sundays, they arrive at the same subway station, wait for the train to arrive, and to pass the time they look at the ads.

We know that at least 70% of passengers consciously familiarize themselves with the ads placed in the subway, because indoors, people are less distracted and looking for something interesting to take in.

Passengers wait for the train for an average of three minutes. Three minutes is quite a long time for the customer to get acquainted with an advertisement.

The bus waiting area is the perfect place to create a non-standard, memorable campaign for the brand. This type of outdoor advertising has several major advantages – it is face to face with the public, it is possible to interact with it, use creative visuals, and display extensive information.

Q. Congratulations on winning the Golden Brand award. In your opinion, why did experts name Alma their favorite company?
A. We think our main achievement is that we offer innovations to the outdoor advertising industry.

We are striving to meet the challenges posed by the advertising market, and with the help of our team of professionals we can handle any task before us.